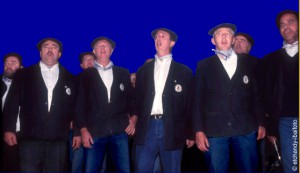 «The Basques: a small nation that sings and dances at the foot of the Pyrenees mountains » Voltaire.

Basques are not Mediterranean : they speak very little (and always keep their word!), but sing a lot! And in a language whose origin has yet to be discovered and wasn’t even written until the 14th century, its resonance mixes well with melodies.

All Basques can sing without even having taken lessons. It’s all in the ear. In the same way that Africans are born with rhythm, if carried on his mother’s shoulders, the little Basque is born and raised in song. First, at home he goes to sleep with his mother’s lullabies. At church, a musical academy in itself, he learns musical rules by listening. At the fronton, the smack of the pelota ball is interrupted by the points singer. For the “angelus”, during festivals, plays (dating back to the Middle Ages) are sung for 3 hours by shepherds and farmers.
Last, but not least, there are also the “bertsularis” competitions (improvisational singers).

There’s not one single community that doesn’t have a choral! It’s a passion so deeply engrained in the culture, sometimes in protest, that during Franco’s reign the following declaration was posted in bars: “singing is forbidden !”