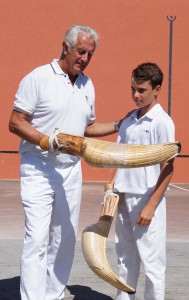 In recent years, many guest houses have opened in the Basque Country, in large part by people coming from elsewhere. Don’t take it as basque xenophobia. But families took their names from their house (up until the institution of Napoleonic law) which is why the houses are so well maintained. This explains their hesitancy in letting strangers go any further than the front room…

At Irigoian, you’ll stay with locals whose heart felt task is not only to help you discover their country but also to love it. In order to do this, you’ll have to learn more about the basque culture’s mysterious origins. A nation of unknown origin that speak a language unlike any other!

For more than 200 years, ethnologists and linguists have studied the question and have yet to resolve it.
But the greatest mystery is how this enigmatic culture and language persisted in spite of the passage of various invaders over the centuries such as Celts (800 b.c.), Romans, Charlemagne’s nephew, Arabs, and even tourists! All this never ending ebb and flow of different cultures and languages by all rights should have eradicated all traces of basque heritage leaving in its wake McDonald’s and highrise hotels.

But it’s quite the contrary: Strong yet flexible like a reed, this country of oak and beech trees offers you its scenery, language, customs, games, gastronomy – in short, its unique culture.
Nestled between the ocean and Pyrenees mountains, rich in local culture but open to the world, the Basque Country stands proud and strong keeping its originality in the winds of change.

To see more than you would on a postcard, Philippe Etcheverry offers you keys to this mysterious land at his family home. He’ll share the love of this home and country by giving you tips on the best walks; pelota games, Basque choir concerts, great restaurants, authentic craftsmen, and to buy local quality products.