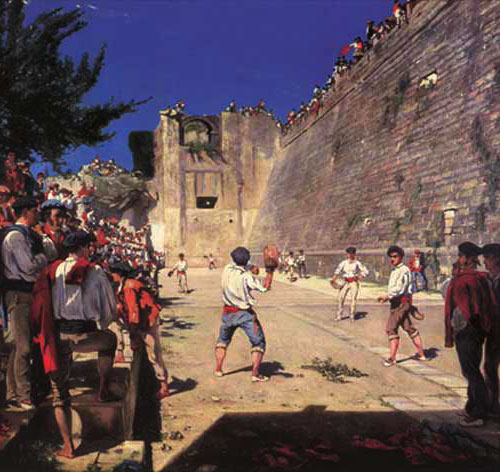 An old adage sums up the Basque trinity:

When you’re a small nation, you have to make due with what you have!

“Pelote” is a generic term (like athletics): it encompasses 22 ways of playing, using different tools (bare hand, the pala board, the chistera basket…), the type of pelota ball and where the game is played (open space, covered fronton…).

It’s not an unpopular sport since it’s been estimated that there are 60,000 players in France alone!

In fact, what we call Basque pelota was at first a worldwide game played since ancient times (Greeks, Romans, Aztecs…) in which players competed against one another. It was usually played bare handed (long and short palm) with nobility using rackets from which came the expression “played by hand only by the common man.” 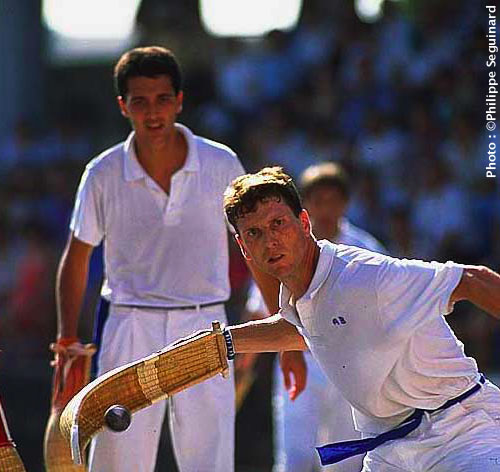 But when someone had the bright idea to add rubber to the pelota ball, playing areas had to be enlarged due to the added bounce. This wasn’t always possible. Hence came the idea to divide the ball’s trajectory in half by playing against a wall. This is how pelota became an original Basque game.

The Basques didn’t stop with the invention of pelota – they also founded the first order of Jesuits (Francois Xavier, Ignace of Loyola) who put up frontons at all of their missions around the world. The end result is that about fifteen countries participate every four years in the Basque Pelota world championship.

During your stay at Irigoian, Philippe will tell you which pelota games to see. And if your heart is set on it, you can even take an initiation class and learn firsthand how to play this ancestral game that the Basques have managed to preserve.

The site of the French Federation of Basque pelota