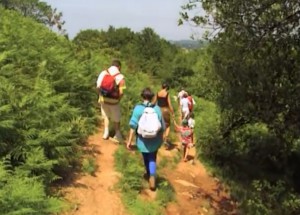 What most surprises our visitors is how close by everything is: here everything is nearby and much of it is just outside our door !

The mountains slope down into the sea and the interior Basque Country is just a stone’s throw away.

If we had to define the Basque Country in one word, it would be CONCENTRATED.

Following in the footsteps of shepherds, smugglers or the sea mist, the foot paths here are as varied as the country in which they’re found. The “GR 10” path crosses the official pedestrian portion. And then there are the unofficial paths, whose whereabouts are handed down from father to son, generation to generation.
All roads lead to a “Rome” of sorts: a little pub or a “venta”, small duty free stores set in the mountains of Spain right along the french border. The advent of Europe (E.E.C.) put an end to the endless legal squabbles over which country’s law was applicable! No more sweating while going through customs with pastis liqueur and chorizo sausage hidden under “Amatxi’s”(grandma’s) skirt who sat in the back seat with the children! Talaia is a footpath stretching for 54 km along the Basque coast, with some truly breath-taking views along the way


From Bidart to San Sebastian, mountains on one side,cliffs, beaches and the open ocean on the other, take astroll along the Coastal Trail. Walks and routes to suit all tastes, from pleasant family strolls to four-day adventures.

Philippe can propose made-to-order trips: in one weekend, you’ll feel like you’ve seen it all and after a 2 week stay, you’ll have an idea just how much there is left to discover!